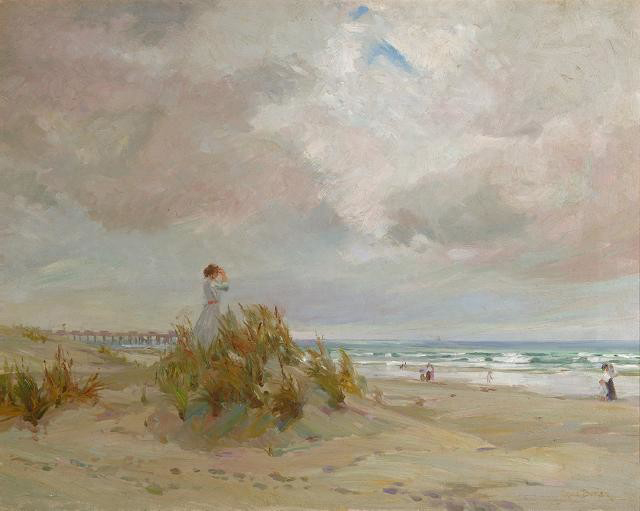 Grace Butler, On the Beach, New Brighton,1916, oil on canvas,

Two of Grace Butler’s early impressionist paintings of the suburbs of New Brighton and Onehunga, Auckland are featured in Endless Light, a survey of primarily historical late 19th and early 20th century paintings by European, Australian and Aotearoa New Zealand artists.  Nathan Pohio  Kaitiaki toi curator at the public gallery brings together paintings by Petrus van der Velden, Edmund Gouldsmith and Sir Alfred East, sharing the gallery’s space with Butler’s On the Beach, New Brighton, 1916 and Evening Glow, 1919.  Both embody a modernity that contrasts with the “Royal Academy” landscape, John Gibb’s Bottle Lake, 1882 and East’s The Moon and the Manner House, c. 1894.

Butler’s On the Beach, New Brighton is one of her earliest works. The beach and seaside a favourite subject of French Impressionists, Édouard Manet, Claude Monet and Pierre-Auguste Renoir, the figures in Butler’s New Brighton have their counterpart in the contemporary subjects and observations of these French artists.
Endless Light is at the Christchurch Art Gallery from 29 June 2019 to 8 March 2020

+ Text Size -
Do NOT follow this link or you will be banned from the site! Original generation time 1.7654 seconds. Cache Loaded in: 0.0155 seconds.